A team of four students from CCS recently took part in the CanSat challenge recently. The team members were Elain Polakova, Joanna Wojcik, Owen Glynn and Nikodem Kondonikolau. The European CanSat Competition is an ESA (European Space Agency) educational project aimed at promoting STEM (Science, Technology, Engineering and Maths) literacy amongst young European students through project-based learning. The CCS team’s challenge was to fit all the subsystems of a satellite inside a can the size of soft drinks can! The team had to accomplish two missions: a mandatory primary mission – to collect and transmit air temperature and pressure data at least once a second by means of radio waves, land the satellite and a secondary mission completely open to the team’s imagination! The secondary mission could be exploring a new planet, fitting a gps system, analysing the earth’s atmosphere, developing a rover to fit inside the CanSat, or anything else the team may devise. They also had to design the container to take the subsystems.

There was a third phase to the competition which involved communicating with the local community and schools, having a social media presence or designing a website and also getting media coverage for the project. Ground Control – the students receiving data back from their CanSat after it’s launch into space.

The CanSat after it’s launch on it’s way into space.

The team went to TUS (AIT) recently to launch their satellite, gather results while it was in flight and present their findings to a group of adjudicators. After the presentation they had to answer questions  on their project and findings. The team were presented with certificates for their efforts.

A most educational, enjoyable and rewarding event was had by all.

The Team would like to thank Ms. Hanbury for helping them with their project and also Mr Kevin McDermott TUS for taking time out of his busy schedule to mentor the students 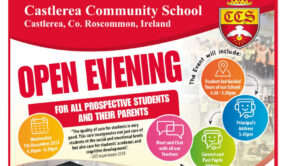 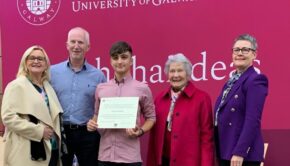 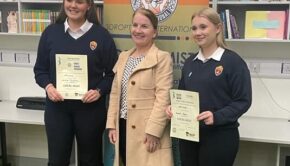 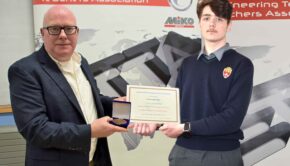